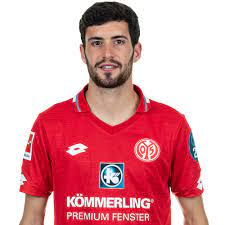 Aarón Martín Caricol (born 22 April 1997) is a Spanish professional footballer who plays as a left back for RC Celta de Vigo on loan from German club 1. FSV Mainz 05.

Espanyol
Born in Montmeló, Barcelona, Catalonia, Martín joined RCD Espanyol’s youth setup in 2005. On 29 March 2015, while still a junior, he made his senior debut with the reserves by starting in a 0–1 Segunda División B away loss against Gimnàstic de Tarragona.

Martín scored his first senior goal on 16 January 2016, the first in a 2–0 home win over CF Reus Deportiu. On 13 June, already being an undisputed starter, he renewed his contract until 2020.

On 2 October 2016, Martín made his first-team – and La Liga – debut, coming on as a second half substitute for Diego Reyes in a 0–0 home draw against Villarreal CF. The following 28 January he agreed to an extension until 2022, being definitely promoted to the first team three days later.

Mainz 05
On 6 August 2018, Martín joined 1. FSV Mainz 05 on a season-long loan. His first appearance in the Bundesliga took place on 26 August, in a 1–0 home defeat of VfB Stuttgart where he featured the full 90 minutes.

Martín signed a permanent contract on 5 November 2018, effective as of the following 1 July. On 31 December 2020, he was loaned to RC Celta de Vigo for the remainder of the campaign with an option to buy.