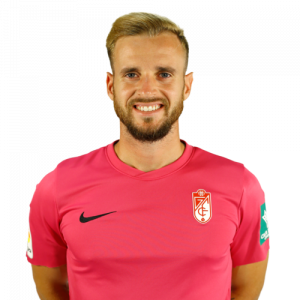 Aarón Escandell Banacloche (born 27 September 1995), simply known as Aarón, is a Spanish footballer who plays for Granada CF as a goalkeeper.

Born in Carcaixent, Valencia, Aarón finished his formation with Málaga CF. He made his senior debut for the reserves on 15 September 2013, starting in a 0–0 away draw against Atarfe Industrial CF for the Tercera División championship.

On 8 December 2013 Aarón first appeared with the main squad, being an unused substitute in a 3–3 Copa del Rey home draw against CA Osasuna. For the 2015–16 campaign, he was chosen as third-choice behind Guillermo Ochoa and Carlos Kameni.

Aarón made his professional debut on 13 September 2018, starting in a 1–2 loss at Elche CF, for the season’s Copa del Rey. His league debut occurred the following 9 June, playing the full 90 minutes in a 2–1 home win against AD Alcorcón, as his side was already promoted.