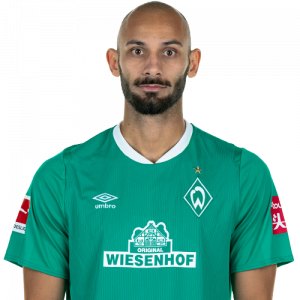 Ömer Toprak (born 21 July 1989) is a Turkish professional footballer who plays as a centre back for German club Werder Bremen, and the Turkey national team.

Toprak began his career with TSB Ravensburg in 1994. In 2001, he moved to FV Ravensburg.

SC Freiburg
Toprak signed for SC Freiburg in 2005. Three years later, He signed his first professional contract in the 2007–08 season. During that period, he played for Freiburg U19 and the reserve team and won 22 games with the latter.

In his first professional season, he featured in 26 league games and scored 4 goals as Freiburg won the 2. Bundesliga and promoted after a defeat of VfL Osnabrück. On 9 June 2009, Toprak suffered from a karting accident, causing him to miss the first half of the 2009–10 season but he recovered, scoring a goal against Hamburger SV on the 65th minute. Toprak played 24 league games during the 2010–11 season.

Bayer Leverkusen
Bayer 04 Leverkusen signed Toprak as a replacement for newly retired Sami Hyypiä for a reported transfer fee of €2 to 3 million. He appeared in the match versus Dynamo Dresden in the 2011–12 DFB-Pokal but they were eliminated 4–3. In Bayer’s first match against Mainz 05, he scored an own goal, causing his team to lose 2–0. He scored another own goal against Hertha BSC. Bayer managed to qualify to the Champions League round of 16, where they were eliminated by FC Barcelona.

Werder Bremen
In August 2019, Toprak joined Werder Bremen on a year-long loan from Borussia Dortmund. Werder Bremen announced the deal includes an purchase obligation to permanently sign Toprak that would come into effect with a “high likelihood”; the reported transfer fee agreed for that case was reported as €5 to 6 million. The permanent signing took effect in July 2020.