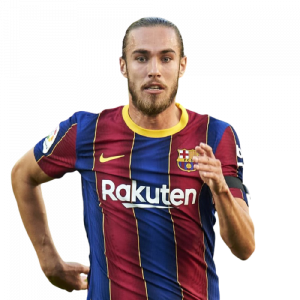 Óscar Mingueza García (born 13 May 1999) is a Spanish professional footballer who plays for Barcelona B, where he serves as vice-captain.

Mainly a centre-back, he can also play in either full-back position, mostly as a right-back.

Born in Santa Perpètua de Mogoda, Barcelona, Catalonia, Mingueza joined FC Barcelona’s La Masia academy in 2007. He won the UEFA Youth League with the club’s Juvenil A team in 2018. He moved up to FC Barcelona B for the 2018–19 season.

Mingueza made his first team debut for Barcelona on 24 November 2020, as a replacement for the injured Gerard Piqué, starting the 4–0 2020–21 UEFA Champions League group stage victory against Dynamo Kyiv at the NSC Olimpiyskiy in Kyiv. Five days later, he made his La Liga debut in a 4–0 win against Osasuna at Camp Nou. On 15 March 2021, Mingueza scored his first goal for Barcelona in a 4–1 home win over Huesca in La Liga. He scored his second career goal in the 60th minute of El Clásico on 10 April 2021. One week later, he won his first professional title, after winning the 2020–21 Copa del Rey against Athletic Bilbao.