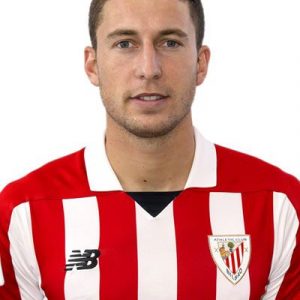 Óscar de Marcos Arana (born 14 April 1989) is a Spanish professional footballer who plays for Athletic Bilbao usually as a midfielder but also as a full back (right or left).

He spent most of his career at Athletic Bilbao, making over 400 official appearances and winning two Supercopa de España trophies. He started playing with Alavés.

In July 2009, de Marcos went straight into La Liga, penning a four-year deal with Athletic Bilbao for about €350,000. He made his club debut on 6 August in a 2–1 win at BSC Young Boys in the UEFA Europa League (2–2 aggregate, victory on the away goals rule), as a starter. Ten days later he opened the score against FC Barcelona in the season’s Supercopa de España, as the Basques eventually lost 1–2 at home and 1–5 in total.

In July 2019, de Marcos reached the milestone of ten years with the same club. An injury to his left ankle ligaments forced him to miss much of 2019–20, but he was able to return after the delay caused by the COVID-19 pandemic in Spain.

On 29 November 2020, de Marcos played his 400th match for Athletic as a substitute against Getafe, becoming the 19th player to reach that mark. The following 17 January, he was on target against Barcelona – seconds after Antoine Griezmann’s opening goal – in a 3–2 win in the Spanish Supercup final. On 2 February he agreed an extension to his contract to run to the summer of 2022, with no buyout clause.