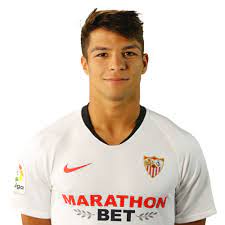 Óliver Torres Muñoz (born 10 November 1994) is a Spanish professional footballer who plays for Sevilla FC as a central midfielder or an attacking midfielder.

After starting out at Atlético Madrid he went on spend several years in Portugal with Porto since first joining on loan in 2014, winning the Primeira Liga in the 2017–18 season.

On 3 July 2014, Torres was loaned to Porto in a season-long loan deal.[12] He made his Primeira Liga debut on 15 August in a 2–0 victory over C.S. Marítimo at the Estádio do Dragão, playing the full 90 minutes. On 31 August he scored his first goal for his new team, opening a 3–0 home win against Moreirense F.C. in the 70th minute.

Torres was nominated for the 2014 Golden Boy Award. On 25 August 2016 he rejoined the Portuguese in another loan move, which was made permanent the following 9 February for a fee of €20 million.