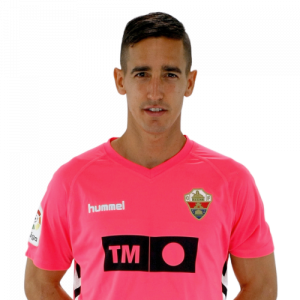 Édgar Badía Guardiola (born 12 February 1992) is a Spanish professional footballer who plays for Elche CF as a goalkeeper.

Born in Barcelona, Catalonia, Badía was a product of local RCD Espanyol. He spent his first seasons as a senior competing in Segunda División B and Tercera División, with the B team.

On 11 January 2012, Badía made his official debut with the main squad, playing the full 90 minutes in a 4–2 home win against Córdoba CF for that campaign’s Copa del Rey (5–4 on aggregate). He continued to be almost exclusively associated with the B’s during his spell.

Badía signed with Granada CF in July 2013, being assigned to the reserves in the third level. On 20 January of the following year, after acting as a backup to Stole Dimitrievski, he terminated his contract with the Andalusians and moved to fellow league team CF Reus Deportiu.

Badía was an undisputed starter for the club during the following campaigns, achieving promotion to Segunda División in 2016. On 28 December 2018, he was one of the five players who left Reus due to unpaid wages.

On 5 January 2019, Badía signed a six-month contract with Elche CF also of the second tier.