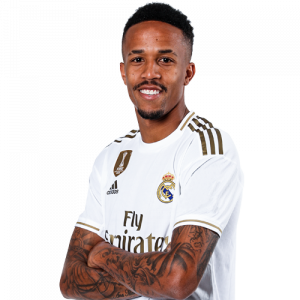 Mainly a central defender, he can also play as a right back or defensive midfielder.

Militão began his career at São Paulo, playing 57 matches over two years before transferring to Porto. In 2019, after one season in Portugal, he joined Real Madrid for a reported transfer fee of €50 million.

Militão made his senior international debut for Brazil in 2018 and was part of their squad that won the 2019 Copa América.

On 14 March 2019, Real Madrid announced that they had signed Militão to a six-year contract effective 1 July 2019 after paying a €50 million transfer fee to Porto. He made his debut on 14 September, coming on as a substitute for Sergio Ramos for the last half-hour in a 3–2 home victory over Levante. He made 15 appearances during the league season as Real Madrid won the 2019–20 La Liga.

Militão scored his first goal for Madrid on 20 January 2021, heading in compatriot Marcelo’s cross to open a Copa del Rey last 32 match away to third-tier CD Alcoyano; his team unexpectedly lost 2–1. His first league goal came on 1 May 2021, in a 2–0 win over Osasuna.