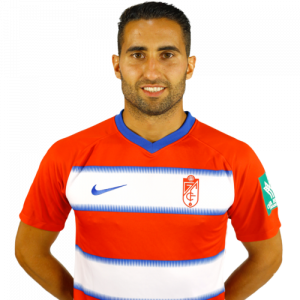 Ángel Montoro Sánchez (born 25 June 1988) is a Spanish professional footballer who plays for Granada CF as a central midfielder.

A product of hometown Valencia CF’s youth ranks, Montoro was born in Valencia. He made his first-team debut on 31 October 2007, playing ten minutes in a 1–5 La Liga home loss against Real Madrid as interim manager Óscar Fernández filled in for the recently dismissed Quique Sánchez Flores; with Ronald Koeman’s subsequent arrival and the January 2008 signing of Hedwiges Maduro and Éver Banega, he had to return to the reserves.

In the following two years, Montoro served as much loans (both in the second division), with Real Murcia and newly promoted Real Unión. Released by the Che in the summer of 2012, he continued competing in that level with Recreativo de Huelva.

Montoro signed for UD Almería also of division two on 30 June 2015. On 26 January of the following year, he terminated his contract and joined top tier club UD Las Palmas for 18 months.

On 15 July 2017, free agent Montoro agreed to a three-year deal with Granada CF.