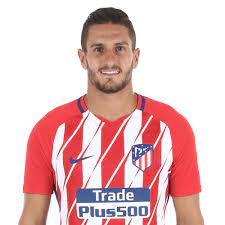 Ángel Martín Correa Martínez (born 9 March 1995), known as Ángel Correa, is an Argentine professional footballer who plays as a forward and winger for Spanish club Atlético Madrid and the Argentina national team.

Correa began his professional career at the age of 18 with Argentine club San Lorenzo, winning the Torneo Inicial in 2013 and the Copa Libertadores in 2014. In 2015, he signed with Atlético Madrid of La Liga.

Correa captained the Argentina under-20 team to victory at the 2015 South American U-20 Championship, where he was named the player of the tournament. Since 2015, he has been a regular selection for the Argentina senior squad.

On 27 May 2014, after scoring six goals in 2013–14, Correa had agreed a deal with La Liga holders Atlético Madrid for a reported fee of €7.5 million. He signed a five-year contract with the Madrid side, joining the club after the 2014 Copa Libertadores.

In June 2014, however, Correa was sidelined for six months due to a heart tumour. After undergoing surgery on 18 June in New York, he started a light training in August, and officially joined the club on 13 December.

On 22 August 2015, Correa finally made his Atleti debut, replacing Óliver Torres in a 1–0 home league match win against UD Las Palmas. He scored his first goal for the club on 19 September, netting the first in a 2–0 away win against SD Eibar; he also assisted Fernando Torres in the second goal.

On 6 November 2019, Correa marked his 200th appearance for Atlético, starting in a 1–2 away loss against Bayer Leverkusen. On 10 August, Atlético announced that Correa and teammate Šime Vrsaljko were both positive for COVID-19, ruling them out of the team’s quarter-final fixture against RB Leipzig.