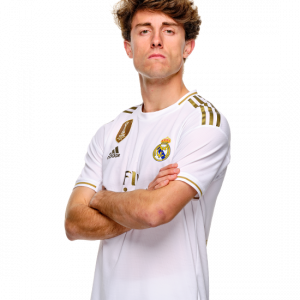 Álvaro Odriozola Arzalluz (born 14 December 1995) is a Spanish professional footballer who plays as a right-back for Real Madrid and the Spain national team.

Mainly a full-back, he can also play as a winger.

Real Madrid
On 5 July 2018, Real Madrid reached an agreement with Real Sociedad for the transfer of Odriozola. The fee was reported to be €30 million, plus €5 million of conditional add-ons. He made his debut on 22 September, playing the full 90 minutes in a 1–0 win over RCD Espanyol. Odriozola scored his first league goal on 21 April 2021, scoring the second goal in a 3–0 win over Cádiz.

Bayern Munich (loan)
After playing just five times for Madrid during the first half of 2019–20, in January 2020 he was loaned to Bayern Munich for the remainder of the season. On 23 August 2020, Bayern won the 2019–20 UEFA Champions League.