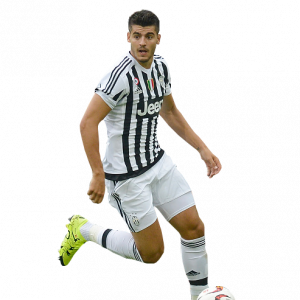 Álvaro Borja Morata Martín (born 23 October 1992) is a Spanish professional footballer who plays as a striker for Serie A club Juventus, on loan from La Liga club Atlético Madrid, and the Spain national team.

He began his career at Real Madrid, making his debut with the senior team in late 2010. After winning the 2013–14 UEFA Champions League, he moved to Juventus for €20 million in 2014, winning the double of Serie A and the Coppa Italia in both of his seasons in Turin. After being bought back by Real for €30 million, he won another La Liga and the UEFA Champions League in 2016–17 before joining Chelsea in 2017 for a club record fee of around £60 million. In January 2019, he moved to Atlético Madrid on loan and joined the club permanently on 1 July 2020. Morata moved back to Juventus on loan in 2020.

Morata earned 34 caps for Spain at youth level, helping the country win the 2013 UEFA European Under-21 Championship. He made his senior debut in 2014, and represented Spain at UEFA Euro 2016.

Morata returned to Juventus on 22 September 2020, on a one-year loan worth €10 million, with an option for purchase at €45 million. Juventus also reserve the right to extend the loan for a further year for another €10 million; in this case, the option for purchase is worth €35 million. He made his first appearance for the club since his return on 27 September, in a 2–2 away draw against Roma in Serie A. He scored his first goal for the club since his return on 17 October, in a 1–1 away draw to Crotone. Morata scored a brace on 20 October, to help Juventus win 2–0 in the UEFA Champions League group stage match against Dynamo Kyiv away from home. On 28 October, he had three goals disallowed for offside against Barcelona in a Champions League group stage game, which Juventus lost 2–0 at home.