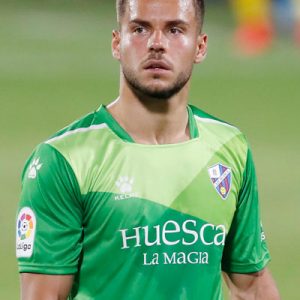 Álvaro Fernández Llorente (born 13 April 1998) is a Spanish professional footballer who plays as a goalkeeper for SD Huesca and the Spain national team.

Born in Arnedo, La Rioja, Fernández was invited to play for Real Sociedad in several youth tournaments before signing for CA Osasuna aged 15. He made his senior debut with the reserves on 12 April 2015, starting in a 1–1 away draw against CD Izarra for the Tercera División championship.

On 25 September 2016 Fernández made his La Liga debut, coming on as a second half substitute for injured Mario Fernández in a 3–1 loss at Villarreal CF. It was his maiden appearance for the Osasuna first team, which suffered relegation as dead last.

On 11 July 2017, Fernández signed a three-year deal with Ligue 1 side AS Monaco FC. After only appearing with the reserve team, he returned to Spain on 7 August 2018, after agreeing to a one-year loan deal with Extremadura UD.

On 29 June 2019, Fernández left Monaco and agreed to a three-year contract with SD Huesca, newly relegated to the second division.