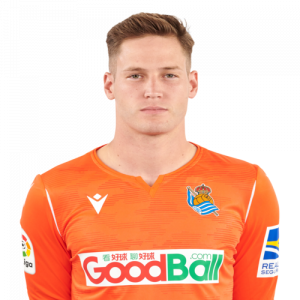 Alejandro “Álex” Remiro Gargallo (born 24 March 1995) is a Spanish professional footballer who plays as a goalkeeper for Real Sociedad.

Formed at Athletic Bilbao, he played as a senior with Basconia, Bilbao Athletic, Levante, Huesca and Real Sociedad. He won the 2020 Copa del Rey with the last club.

Remiro agreed to a four-year deal with Athletic’s rivals Real Sociedad on 10 June 2019, effective as of 1 July. He made his league debut on 27 September, keeping a clean sheet in a 3–0 home victory over Deportivo Alavés.

In May 2020, Remiro tested positive for COVID-19. The following 3 April, he started in the final of the Copa del Rey, helping defeat his first club Athletic 1–0 in Seville.