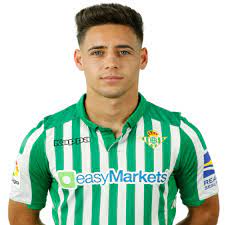 Alexandre “Álex” Moreno Lopera (born 8 June 1993) is a Spanish professional footballer who plays for Real Betis as a left back or left winger.

Early years and Mallorca
Born in Sant Sadurní d’Anoia, Barcelona, Catalonia, Moreno graduated from local FC Vilafranca’s youth system, making his senior debut in 2010–11 in Tercera División. He signed with FC Barcelona in April 2011, being assigned to the youth team; despite being a regular starter, he was released at the end of the season.

In July 2012, Moreno joined Segunda División B club UE Llagostera. He finished the campaign with 1,333 minutes of action, scoring twice.

On 4 July 2013, Moreno moved to RCD Mallorca, recently relegated to the second level. He played his first professional match on 18 August, in a 0–4 away loss against CE Sabadell FC for the Segunda División.

Moreno scored his first goal in division two on 4 January 2014, the last in a 2–2 draw at UD Las Palmas. He featured regularly during the season, as his team narrowly avoided another drop.

Rayo Vallecano
On 15 July 2014, Moreno signed a four-year deal with Rayo Vallecano. He made his La Liga debut on 14 September, coming on as a late substitute in a 2–3 home loss against Elche CF.

Moreno was loaned to Elche of the second tier for one year on 13 August 2015. He was an undisputed starter after returning to the Campo de Fútbol de Vallecas, notably neting three times from 40 appearances in 2017–18 as the side returned to the top flight as champions.