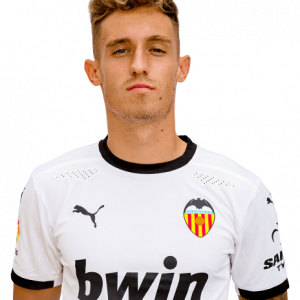 Alejandro “Álex” Blanco Sánchez (born 16 December 1998) is a Spanish professional footballer who plays for Valencia CF as a winger.

Born in Benidorm, Alicante, Valencian Community, Blanco joined FC Barcelona’s youth setup in 2014, from Valencia CF. On 22 July 2016, he returned to the Che, being assigned to the Juvenil A squad.

Blanco made his senior debut with the reserves on 16 September 2017, coming on as a second-half substitute in a 3–2 Segunda División B away win against Atlético Saguntino. He scored his first goal on 9 December, netting the equalizer in a 1–1 draw at CE Sabadell FC.

Blanco made his first team debut on 30 October 2018, replacing fellow youth graduate Lee Kang-in in a 2–1 away defeat of CD Ebro, for the season’s Copa del Rey. On 31 January 2019, Blanco was loaned to fellow La Liga side Deportivo Alavés, until June.

Blanco made his top tier debut on 3 February 2019, replacing Jonathan Calleri in a 0–3 loss at Real Madrid. However, he only appeared in one further match before returning to his parent club.

On 9 July 2019, Blanco extended his contract with the Che until 2021 and joined Real Zaragoza on loan for the season. He scored his first professional goal the following 21 January, netting the opener in a 3–1 home win against RCD Mallorca for the national cup.