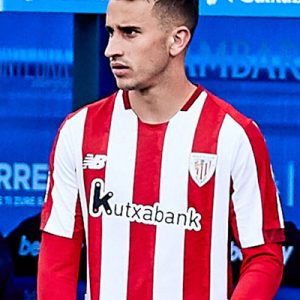 Alejandro “Álex” Berenguer Remiro (born 4 July 1995) is a Spanish professional footballer who plays as a winger for Athletic Bilbao.

Osasuna
Berenguer was born in Pamplona, Navarre; his father’s family is from Almería. He graduated with CA Osasuna’s youth setup, and made his debuts as a senior with the reserves in the 2013–14 campaign, in Tercera División.

On 10 September 2014, Berenguer made his professional debut, replacing Kenan Kodro in the 81st minute of a 2–0 away loss against Deportivo Alavés, for the season’s Copa del Rey. He made his Segunda División debut on 10 January of the following year, again from the bench in a 1–1 away draw against Recreativo de Huelva.

Berenguer scored his first professional goal on 30 August 2015, netting the game’s only in a home success over CD Mirandés. The following 29 January he extended his contract until 2020, and finished the campaign with three goals in 39 appearances as his side achieved promotion to La Liga.

Berenguer made his debut in the highest category of Spanish football on 22 September 2016, starting in a 2–1 home loss against RCD Espanyol. He scored in the top division for the first time on 5 April of the following year, netting the game’s only goal in an away success over Deportivo Alavés.

Torino
On 17 July 2017, Berenguer was sold to Italian club Torino for €5.5 million (plus €1 million in bonuses). In addition, a clause was inserted for an additional €1.5 million in the event he was sold to Athletic Bilbao (a club he had been close to signing for but which had a rivalry with Osasuna, made worse in the weeks beforehand over accusations of Athletic ‘poaching’ a youth player).

Athletic Bilbao
On 2 October 2020, Athletic reached an agreement with Torino for the transfer of Berenguer, who agreed to a four-year deal with his new club.